My weight has been an issue ever since I was a little girl. I was constantly told, “But you have such a pretty face” … to mean, “but the rest of you, not so!”  How many of you have  heard those words? Over a half century later, I still hear that phrase in my head every time I look in the mirror or try to squeeze into a pair of jeans. Heck, whenever I go to eat. Really, when it comes down to it, pretty much all the time.

Bestselling author, Randy Susan Meyers takes on the issues of women and weight in her novel, WAISTED (ATRIA). I ate it up … I’m sorry but I couldn’t resist! It’s not an easy read, because it tackles some really painful topics. But it’s definitely worth checking out – for all woman.

Alice and Daphne, both successful and accomplished working mothers, harbor the same secret: obsession with their weight overshadows concerns about their children, husbands, work—and everything else of importance in their lives. Scales terrify them.

Daphne, plump in a family of model-thin women, learned only slimness earns admiration at her mother’s knee. Alice, break-up skinny when she met her husband, risks losing her marriage if she keeps gaining weight.

The two women meet at Waisted. Located in a remote Vermont mansion, the program promises fast, dramatic weight loss, and Alice, Daphne, and five other women are desperate enough to leave behind their families for this once-in-a-lifetime opportunity. The catch? They must agree to always be on camera; afterward, the world will see Waisted: The Documentary.

The women soon discover that the filmmakers have trapped them in a cruel experiment. With each pound lost, they edge deeper into obsession and instability…until they decide to take matters into their own hands.

I was born in Brooklyn, New York, where I quickly moved from playing with dolls to incessantly reading, spending most of my time at the Kensington Branch Library. Early on I developed a penchant for books rooted in social issues, my early favorites being Karenand The Family Nobody Wanted. Shortly after, I moved onto Jubilee and The Diary of Anne Frank.

My dreams of justice simmered at the fantastically broadminded Camp Mikan, where I went from camper to counselor, culminating in a high point when (with the help of my strongly Brooklyn-accented singing voice), I landed the role of Adelaide in the staff production of Guys and Dolls.

Soon after my brief stage career, I was ready to change the world, starting with my protests at Tilden High and City College of New York . . .

. . .  until I left to pursue the dream in Berkeley, California, where I supported myself by selling candy, nuts, and ice cream in Bartons of San Francisco. Then, world weary at too tender an age, I returned to New York, married, and traded demonstrations for diapers.

While raising two daughters, I tended bar, co-authored a nonfiction book on parenting, ran a summer camp, and (in my all-time favorite job, other than writing) helped resurrect and run a community center.

Once my girls left for college, I threw myself deeper into social service and education by working with batterers and victims of domestic violence. I’m certain my novels are imbued with all the above, as well as my journey from obsessing over bad boys to loving a good man.

Many things can save your life—children who warm your heart, the love of a good man, a circle of wonderful friends, and a great sister. After a tumultuous start in life, I’m lucky enough to now have all these things. I live in Boston with my husband, where I live by these words:

“Be regular and orderly in your life, so that you may be violent and original in your work.”  Gustave Flaubert, French Novelist 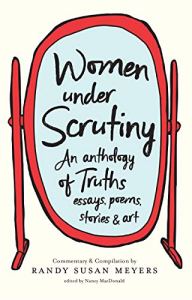 “When I was a child, my mother hid everything sweet and delicious in the large soup pot she kept on top of the tallest cabinet in the kitchen. Thus, my sister and I, at the tender ages of perhaps five and eight, learned to be mountain climbers. Only recently did I consider that maybe Mom was hiding the cookies from herself as well as us.” RSM

Women Under Scrutiny is an honest, intimate examination of the relationships we have with our bodies, hair, and faces, how we’ve been treated by the world based on our appearance—and how we have treated others. The women who created the serious, humorous, and courageous work in this anthology—women ages seventeen to seventy-six—represent an array of cultures and religions from across the United States. They are an extraordinary group of women who all share one thing: the ability to tell the truth.

Thanks to GetRed PR we have one copy of WAISTED to giveaway. Just tell us if you’ve ever had any weight issues. We’ll announce a winner soon. Good luck.