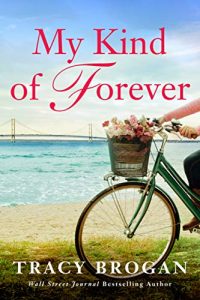 MY KIND OF FOREVER(MontlakeRomance) by Tracy Brogan is a lighthearted love story set in a small town. It’s book two in the Trillium Bay series. As the youngest mayor Trillium Bay has ever elected, Brooke Callaghan wants to prove she’s up to the challenge. She’s stepping out of her practical teacher flats and into her sister’s treacherously high heels…with disastrous results. But if she’s going to (literally) stumble her first day on the job, why not fall into the arms of a handsome stranger?

Leo Walker is a rarity on Wenniway Island. Not only handsome, he’s also single, funny, and—most importantly—interested in Brooke. Unfortunately, his reasons for being on the island are temporary, so in spite of the undeniable chemistry between them, he’s not a forever kind of guy.

When a private investigator arrives with news of a jewel thief hiding on the island, Brooke finds herself dealing with one kerfuffle after another, and Leo proves to be a delicious distraction. What does she really know about him, though? And the biggest question of all? Does this short-term romance hold the possibility of long-term love?

This is a cozy romance without any sex, but lots of kisses. I’d suggest a chilled pinot grigio to enjoy while reading! 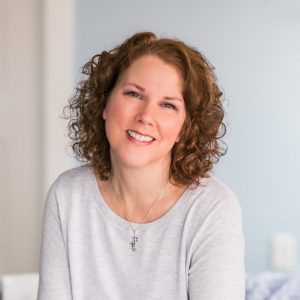 Hello! And welcome to the interwebz version of my living room. I’m so glad you’re here. Please feel free to pull up a chair while we chat. I’d offer you coffee but, you know… virtual. If you want coffee, you’ll have to get your own.

Annnnnnnnywho, some stuff about me…

For a very long time, I was one of those (quasi-delusional?) people prone to saying, “I’m going to write a book… someday.” And I meant it, but never truly believed being a published author was within my grasp. I dabbled in writing, starting manuscript after manuscript but never finishing one. I let my someday get postponed by other careers (in medical education) and family stuff (love, marriage, kids, dogs, vacuuming, divorce, more vacuuming) but when the second of my two daughters started first grade I made a decision. I decided I would either complete a manuscript that year or stop telling people I was writing a book. Talk is cheap, as they say, and it was time for some action. So, I gave the dream a deadline, which transformed it into a goal.

Although all my previous attempts at fiction had been in the historical romance genre, I had the spark of an idea for a contemporary romance. One with eccentric characters, a hunky modern-day knight, and a slightly neurotic heroine with perfectionism issues and an obsessive need to label her refrigerator shelves. (Yes, I have labels on my refrigerator shelves. Everyone ignores them.) I hunkered down that year and gave it my best shot and that book ultimately became my bestselling debut novel, Crazy Little Thing.

That’s the short version. In the longer version, I would tell you all the details about writing that story, re-writing that story, and then re-writing it again over the course of the next two years. I would tell you about the dozens of contests I entered, some of which I won, and some of which provided me with soul-crushing feedback. The victories were sweet, but it was the critical feedback that helped me learn how to craft a better story. I would tell you about joining Romance Writers of America® and meeting the best pals a gal could hope for. Without RWA, and without those amazing writer-friends I would not be where I am today. I might share with you the drama of the Query-Go-Round and the Great Literary Agent Hunt, or about how it felt to be nominated for an RWA Golden Heart award, not once but twice! I could tell you how it felt to be nominated for the prestigious RWA RITA award, not once, not twice, but three times! And I might add something about how incredible and surreal it feels to land on the Wall Street Journal Bestsellers list, or to hit #1 on the Amazon Kindle Bestseller list. Because all of that stuff is important and wonderful and I’m humbled and honored.

But what I really want you to know about me is that nothing brings me greater joy or greater reward than hearing from readers who say my books made them laugh out loud. That my books helped brighten an otherwise dark spot in their lives. Or made a long layover at an airport truly enjoyable. When someone sends a note to say, “I absolutely related to that character, I want to be best friends with this heroine, and I want to live in that town.” Well…THAT means more to me than awards or accolades.

I write because I have stories to tell, and I feel a sense of personal satisfaction when I complete a manuscript, but the thing that feeds my soul is knowing readers respond to my work, and that I have connected with you in some way. I write for you guys as much as I write for myself. It’s a pleasure to do the work I do, and as long as you keep reading, I promise I’ll keep writing!

Thanks to Montlake Romance, we have one copy to giveaway. Just tell us your favorite love story. We’ll announce a winner soon. Good luck.

27 thoughts on “MY KIND OF FOREVER by Tracey Brogan & Giveaway”