SILVER GOODBYE is the seventh in John H. Cunningham’s highly-anticipated, Buck Reilly Adventure series, but it can be read as a stand alone. It’s fast-paced, full of action and takes place in a hurricane. WOW!

This time we find Buck living comfortably at the La Concha Hotel in Key West and staying out of trouble for once in his life. However, there’s a big BUT coming…

Buck discovers something shocking and sordid about his role model father, who appeared to everyone to have led an exemplary life as an Under Secretary of State with the State Department. The revelation sends Buck in search of answers to a thirty-year-old family mystery and a cache of untold riches. As any good Buck Reilly Adventure would have it, there is always a beautiful woman, a treasure, and an enemy hell-bent on making sure Buck doesn’t see the light of another day.

To make matters worse, Hurricane Irma is ripping a path of destruction through the Caribbean, forcing Buck to race against its descent onto the Keys to save the girl and find the buried stash before the storm surge washes it away.

SILVER GOODBYE’s quirky characters, secrets and betrayals will have you flipping pages to the very end … and will have you checking out John’s prior books in the series. We’re looking forward to the next Buck Reilly Adventure. 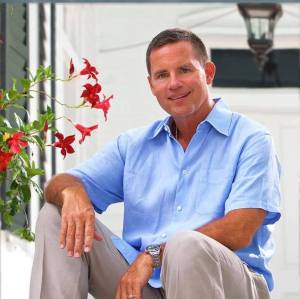 Through the years, John has been a bouncer at a Key West nightclub, a diver, pilot, magazine editor, commercial developer, song writer and global traveler. He has either lived in or visited the many island locations that populate the series, and has experienced or witnessed enough craziness and wild times to keep the Buck Reilly series flowing. John mixes fact with fiction and often includes real people in his novels, like Jimmy Buffett, Chris Blackwell, Matt Hoggatt, Thom Shepherd, Dave McKenney, Keith Sykes, Marius Stakelborough, Bruno Magras and Bankie Banx to augment the reader’s experience.

Adhering to the old maxim, “write what you know,” John’s books have an authenticity and immediacy that have earned a loyal following and strong reviews. Buck Reilly is a reflection of us all, including our frailties, strengths, dreams, fears, successes, failures, mistakes and occasional victories. No government agency, team of soldiers, unlimited cash, or secret agents are coming to Buck’s rescue, because, well they’re not coming to us rescue either, are they?

John lives in Virginia and Key West, and spends much of his time traveling. His choices for the places and plots that populate the Buck Reilly series include many subjects that he loves: Key West, Cuba, Jamaica, and multiple Caribbean settings, along with amphibious aircraft, colorful characters, and stories that concern themselves with the same tensions and issues that affect all of our lives.

***GIVEAWAY*** We’re partnering with Suzy Approved Book Tours to give away a copy of Silver Goodbye to one of you! Restrictions: US addresses only. To enter: leave a comment below with a favorite action/thriller novel or series below.

Thanks to Suzy Approved Book Tours for organizing the tour. Find the rest of the tour stops Here.