Spring has sprung and SHE WRITES PRESS, Spark Press and BOOKSPARKS continue their spring reading challenge with Ida Curtis,’ SONG of ISABEL. 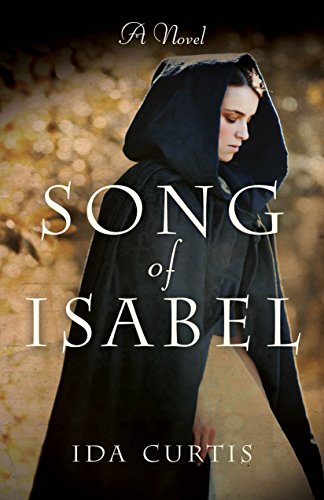 Ida Curtis novel, SONG of ISABEL is rich with historic detail, drama, and a compelling novel of love, sex, ambition and intrigue.

Lady Isabel is just twelve years old when Lord Chetwynd rescues her from being raped by warriors in his company. When they meet eight years later, each has a good reason for entering an arranged marriage. Together, they embark on a perilous journey to the court of King Louis. On the way, danger from enemies on the journey brings them closer together; when they arrive at court, rivalry and intrigue nearly parts them. Ultimately, however, they survive these trials through their own native wit and charm—and gain new respect and love for one another.

For lovers of historical fiction, which takes readers on a swooping trip of perilous love and danger, SONG OF ISABEL is a winner.

Born in Connecticut in 1935, I grew up in Newington, a small town outside Hartford. During high school I worked at the soda fountain in the local drugstore where my friends enjoyed large ice cream cones and sundaes with lots of chocolate syrup.

Life in Newington was good until the summer of 1953 when I contracted polio. During the contagious stage I was a patient at McCook Hospital in Hartford, then was moved to the Newington Home and Hospital for Crippled Children. Although Newington was my hometown, I had no idea what a different world I’d discover in the hospital on the hill.

The first happy surprise was finding myself in a ward with eleven lively teenagers, some confined to bed in large body casts and others moving around with crutches. They were all eager to learn what was wrong with me and how much I could move. By this time I was completely paralyzed with only limited movement of my right arm and hand. My roommates were all dressed and there was not a hospital gown or pair of pajamas in sight.

The hospital had a surgery, provided rehabilitation, and included a school where many of the students attended classes in beds pushed to the schoolroom by a porter named Charlie. He enjoyed referring to the room of teenage girls as the crazy ward.

Since the hospital was in my hometown, I assumed I’d be able to see my friends every day. The unhappy surprise was that visiting hours were confined to Saturday and Sunday for only one hour. In addition, only two visitors were allowed on the ward at one time. One visitor, Jerry Curtis, was a year ahead of me in High School and about to start his first year at Yale University. He surprised me by asking if he could write to me, and I was delighted to agree. As Jerry was studying American Literature, he sent book suggestions and helped me become an avid reader.

Since progress in regaining the use of my limbs was slow, I attended my senior year of high school in her bed. Although I was still unable to sit up, I graduated high school at the hospital in June 1954. It took another year for me to be able to use a wheelchair and go home for weekends.

When I finally left the hospital, I attended St. Joseph College in West Hartford, Connecticut. Jerry and I married at Christmas time in 1956, and in the new year I finished my second year at College while Jerry completed his degree at Yale.

Jerry and I moved often, following his academic career moves, and had two children along the way.  I often took courses at the colleges where Jerry was a student for an advanced degree or taught, and I finally completed my B.A. in History at Indiana University in 1969.

Our family moved to Vancouver, British Columbia in 1971 where Jerry became an English professor at Simon Fraser University. His nickname disappeared and he was called Jared to distinguish him from the other Jerrys in the department. I worked in the Geography Department where I advised students and supervised staff.  After retiring, and inspired by my historical studies, I began to write novels.

Jared and I moved from Canada to Seattle in 2002 to be near our son Randy, who had recently married Amy Hamblin. We were delighted when our granddaughter Alice was born.  Our daughter Idamay, who had been living in Calgary, Alberta, soon joined us and married Alan Hall.

Thanks to SheWritesPress, we have one copy of SONG of ISABEL to giveaway. Just tell us the most interesting historical novel you’ve read recently.

11 thoughts on “SONG of ISABEL by Ida Curtis & GIVEAWAY”