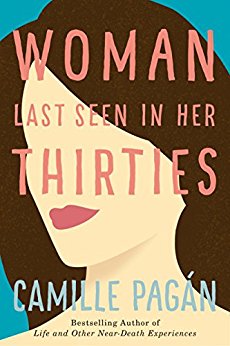 In Camille Pagan’s new novel, WOMAN LAST SEEN IN HER THIRTIES (LakeUnionPublishing), fifty-three, Maggie Harris has a good marriage and two mostly happy children, until she doesn’t. Her husband Adam, decides he’s not in love with Maggie anymore and walks out. Maggie proceeds to implode, and realize she’s basically become invisible taking care of others for the past thirty years.

Then she learns she and Adam had an upcoming anniversary trip planned to Italy, and she’s not going to cancel just because her soon to be ex-loser husband doesn’t want to go, because he has some young hottie.

When she returns, she relocates with the help of a woman she met on the trip and proceeds to peel away all the negative thoughts and fears she’s accumulated over the last three decades – falling air conditioners, the IRS, identity theft, skydiving, and airbag recalls.

She slowly begins to rebuild her life, a new career, even a romance. But when a new crisis hits, she must decide how much of the new woman she’s become she’s willing to keep.

I loved WOMAN LAST SEEN IN HER THIRTIES. I appreciated Camille writing about a woman in her fifties showing that life doesn’t stop after one’s thirties, including traumatic events. Women today are aging gracefully and living full lives with careers and romances until they can’t. And no one is going to stop us.

I fell in love with Maggie. She had just the right amount of neurosis and joie de vivre to come out on top. I believe readers will connect with Maggie, too.

I’ve been telling stories as long as I’ve been able to hold a pen, but I didn’t write a novel until about ten years ago. I had just given birth to my first child and a dear friend was battling terminal cancer; I guess you could say life’s big questions were on my mind. I began writing at night after my daughter went to bed, and after many tough but exhilarating months, completed the draft that would become my debut, The Art of Forgetting. The experience changed me—even before I typed “The End,” I knew I wanted to do it again (and again and again).

Still, it took me several years to write another novel that made it to print. A cross-country move, the birth of my second child, and a heavy dose of second book self doubt had me ready to throw in the towel. Then I sat down and began working on a story just for myself, which put the joy back in my writing. Less than a year after handing that book, Life and Other Near-Death Experiences, to my agent, it became the #1 all-category Kindle bestseller and remained there for more than three of the first four weeks after its publication. Life was recently optioned for film by Jessica Chastain’s Freckle Films.

Not long after Life was published, I was plodding along on a new draft when I suddenly had the idea for my third novel, Forever is the Worst Long Time. I knew it was supposed to be my next book—and luckily my publisher, Lake Union, agreed. Forever was published at the beginning of 2017, and was an RT Reviews top pick and named a best book of the month by Amazon, InStyle, and RealSimple. This year, I’m thrilled to introduce you to Woman Last Seen in Her Thirties and its protagonist, Maggie Halfmoon, who was a delight to write. I just finished my fifth novel (and hope to be able to share more news about it with you soon!).

When I’m not at my computer, you’ll find me with my nose in a book, running after my two kids and our nutty dog, or planning my next trip (most likely to Puerto Rico, where my husband was born and raised). After nearly a decade in Brooklyn and a stint in Chicago, my family and I live in Ann Arbor, Michigan.

Drop me a line or connect with me on Facebook; I’d love to hear from you.

Thanks to Lake Union Publishing, we have one copy of WOMAN LAST SEEN IN HER THIRTIES to giveaway. Tell us what trauma happened in your life that made you stronger. We’ll pick a winner soon. Good luck.